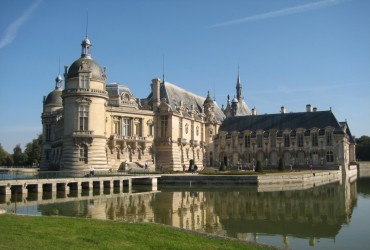 Chantilly Castle is one of the jewels of French heritage. It is also the work of a man with an exceptional destiny: Henri d'Orléans, Duke of Aumale, son of the last French king, Louis-Philippe. This prince, was considered the biggest collector of his time, made of Chantilly the setting of countless masterpieces and precious manuscripts. The castle has survived the centuries as the Duke of Aumale bequeathed in 1886 to the Institut de France, the perfect opportunity to begin a journey through time in the heart of a princely residence. In tribute to his illustrious predecessors Condé Princes, the Duke of Aumale called this set "Condé museum."

Architectural masterpiece of the eighteenth century, the Grand Stables built by architect Jean Aubert Louis-Henri de Bourbon, 7th Prince de Conde, figure as veritable palace for horses.
The building houses the Horse Museum, which shows the relationship between man and horse from the beginning of civilizations. The Grand Stables offer all year horse shows on art high-school dressage contributing to the international reputation of Chantilly, for over 30 years.

The labyrinth of Princes is a plant maze of 4,000 m2 in which one can have fun and get lost.
Created in the early eighteenth century, the Little Park was the amusement park of the Duke of Bourbon, Prince de Conde who did develop in the forested area of the game park for its guests, including a board game-size ( recently restored), the only one preserved in France.
Le Petit Parc is also home to sheep and kangaroos in an enclosure located near the maze and play area.

Photo of the castle: William Cattiaux

GET OUR NEWS AND PROMOTIONS